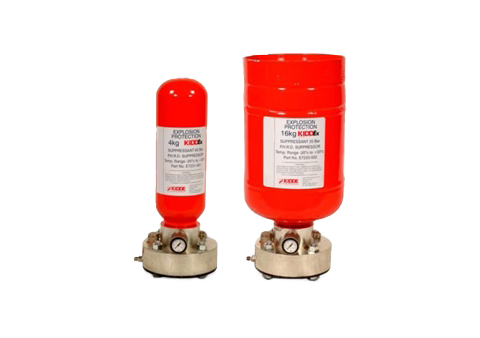 These suppressors are used for explosion suppression of gases, solvent vapours and combustible dusts. The suppressors deliver high rates of suppressant that quench an explosion flame in its early stages, thus preventing a pressure rise from reaching dangerous proportions.

A cylindrical alloy steel container filled with 3kg, 4kg or 16kg of powder suppressant and pressurised to 60 bar (880 psi) with dry nitrogen. Inside the flange is a hinged flap supported by a beam which is kept closed by a latch. Two piston, non-explosive protractor operated actuators are used to initiate opening. When the actuators are activated by means of an electrical impulse from the associated control unit, pistons move the latch, which allows the flap to open. The nitrogen then expels the suppressant at high rate through the spreader assembly into the protected volume.

Concerned about your explosion risk?
Get an expert's opinion now!